The Time of the Doctor Review: Goodbye, Smith

It seems like only yesterday… Matt Smith on his first DW episode, back in 2010

Everybody knew it was happening and, finally, The Time of the Doctor came, and Matt Smith went away. Tearful – very -, funny at times and with a strong entrance by Peter Capaldi, everything very expected. And yet, it felt like it was not the proper goodbye Matt Smith deserved.

I have said several times that my Doctor is Tennant. Everybody has one, even if you like others almost as much. But Matt Smith really grew on me, and he definitely became my second favourite: fun, fresh and with more body language than his ten predecessors together. But it was time to say goodbye to him – as Amy did in the end in our behalf – and for Matt Smith to move on to play serial killers and star in Ryan Gosling films.

I have only watched the episode once so far, as I don’t want to cry again, so I am not quite sure about the plot of this episode: it was Christmas, I got that much. And Clara needed the Doctor to act as her fake boyfriend, although Clara’s story wasn’t that important. For some reason that I missed – I will watch it again – they visit this “church” which is more like a cult, and they are sent to a town called Christmas, where everyone tells the truth. Since this town is at the planet Trenzalore – where the Doctor knows he is buried – and his 12 regenerations have already been used – including War Doctor and Meta-Crisis Doctor – Eleventh cannot escape death, so he presumes he must stay there, send Clara home and die eventually.

600 years or so pass, and the Doctor gets old, very old. In the end, Clara makes it back, creates a perfect environment for Matt Smith to give some optimal speeches and convinces the Time Lords –who are trying to communicate through a crack in a wall that takes us back to season 5 – to give the Doctor at least one more regeneration. The end. Well, the end for Matt Smith. Everybody cries. Christmas is not a nice holiday anymore.

Oh, and Karen Gillan comes back for one emotive cameo, just in case someone had not started crying yet.

There are some loopholes that escape my understanding, such as the way the Doctor can age, the events from the end of season 5 or Clara surviving the time vortex, but nobody should care about it right now. The important aspect of this episode is that it was the last time of Matt Smith as the Doctor, and his acting was superb. He wasn’t saying goodbye to Clara, he was saying it to all of us, and he did it with a broken heart, you could tell. It was time to leave the show, he knew it, but that didn’t make it easier. Such a shame that the first half of the episode didn’t live up to the expectations. Smith didn’t deserve that, and Steven Moffat can write something way better than that.

Overall, The Time of the Doctor was solid, but not as spectacular as it should have been. The regeneration in the bell tower was moving, tremendous, Eleventh in his element… except that it wasn’t. That was only a way of making Smith young again, so that he could say a more intimate goodbye, followed by the quickest, most anticlimactic regeneration since the show was rebooted. One can only guess that Moffat wanted something different from Eccleston and Tennant’s regenerations, and that might be a reason why Smith got “two” farewells. Still, you played us, Moffat. We barely got any closure that way. Even Peter Capaldi looked scared.

Thank you, Matt Smith. You had to fill David Tennant’s shoes, which wasn’t easy, but you soon succeeded, creating your own type of Doctor, the one that only you could have played. The youngest and yet, the oldest and wisest. You have given a splendid performance these three years, and that will remain with us forever. You are the Doctor with whom the show turned 50. We can only hope that you continue being part of our lives through theatre, film or television. Thanks, Raggedy Man.

Eleven’s hour is over now, the clock is striking twelve’s 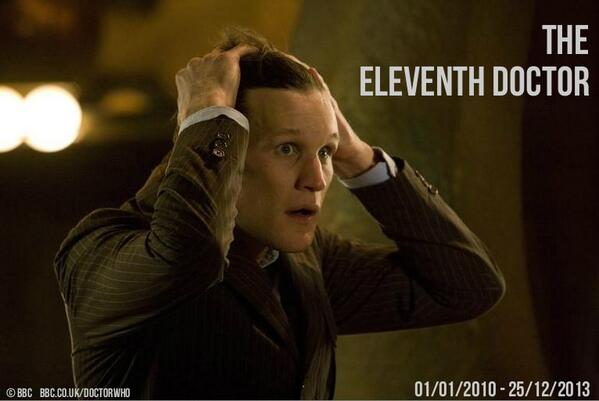 Weeping angels. They show up for less than two minutes and they are still the scariest villains of this show.

“I’m the Doctor. I’m a Time Lord from the planet Gallifrey. I stole a time machine and ran away and I’ve been flouting the principal law of my own people ever since”.

Handles the head: the first time I get emotionally invested in a cyberman. And its relationship with the Doctor reminded me of that of Wilson and Tom Hanks’ character in Cast Away.

-“They engineered a psychopath to kill you”  -“Totally married her”.

“Just one question: do you happen to know how to fly this thing?” Capaldi, already making us love him.

Matt Smith looked straight to the camera at the very end. I didn’t dream it, right?

3 thoughts on “The Time of the Doctor Review: Goodbye, Smith”